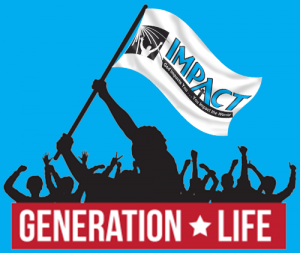 The Pro-Life March is a Pilgrimage to Washington DC to protest the Roe v Wade decision that legalized abortions on January 22, 1973.

We will leave from a satellite location after school (so you don’t miss that day). You will typically miss two days of school. We will get there the next afternoon, and then we will have programming at the Hotel (recently, the Crystal Gateway Marriott) where we are staying with the rest of the Archdiocese. One day will be the March, and then more programming that night. One of the Days (typically the last day) will be the tour day which I will lead; then off to Mass (which counts for our Sunday Obligation Mass). We will then depart for STL. We get back on Sunday around 10am-ish.

To and from DC, we will ride in Coach Buses. During our time in DC, we will use public transportation (subways) and do a lot of walking… a LOT of walking. I have been on this trip for over 20 years as a leader, and I have never lost anyone.

Yes, there is a risk to going, but there is always risk in doing anything. The bus drivers are professionals, The March itself (which is the largest march for a cause) is protected by a heavy police presents. We will have an “IMPACT” logo flag to help as a visual guide. On top of that, IMPACT will have at 5-7 Chaperons; teens will have their numbers in case of emergency (side note: this is the only event where we encourage teens to bring phones). Frankly, I have more anxiety of safety concerns at Seedbearers, than with safety at the Pro-Life March).

DUE TO COVID: The trip (buses and hotel) costs between $300-$400– this is conditional based on how many of our teens go and the type of room we will have. Teens will only be rooming with other IMPACT teens.  I ask teens to bring an additional $100 for snacks, meals (mostly fast food, 8-11 meals), and subway passes. Obviously, some people eat more than others, but $100 is about right. Also, bring more if they want souvenirs.

Young Adults, who are 18+ and are out of High School, must have taken Protecting God’s Children, and done the Archdiocesan background check.

DUE TO COVID: The trip (buses and hotel) costs $200-300– this is conditional based on how many chaperones go and the type of room we will have. Chaperones will only be rooming with other IMPACT chaperones. Again, I recommend bringing an additional $100 for snacks, meals (mostly fast food, 8-11 meals), and subway passes. Obviously, some people eat more than others, but $100 is about right. All Chaperones must be 21 or older, taken Protecting God’s Children, and done the Archdiocesan background check.

DUE TO COVID: Each room will consist of no more than 4 people [same-sex] in a room. Chaperones will not be sleeping in rooms that contain teens [even if their teen is going].

National speakers come to talk about the Pro-Life Movement. The Archbishop of St. Louis traditionally does Masses. We typically have Adoration and Confession.

The March is an overwhelming experience which is somewhat hard to explain. Again, it is the largest march for a cause (last year estimated 800,000 people), and is overseen by a heavy police presence. It starts with a huge rally presented by heads of pro-life organizations, politicians, and religious leaders. The march is filled with lots of prayer and some chanting. Visually, there are lots of banners and signs, and lots of religious people (bishops, priests, monks, nuns). It is awesome to know that we are a part of a cause united with people from all over the country, of different religions, ideals, and views to end abortion.

As the IMPACT group, we try to see one major place (ie the Holocaust Museum, National Archives, Ford’s Theater, Etc) together. Then we go the National Mall (which is a bunch of the Smithsonian Museums), break into 2 or 3 groups, and allow the groups to choose one of the museums. Then we meet up together to walk the “Monuments tour”: see The White House, Vietnam, Lincoln, Korean, and WWII Memorials.